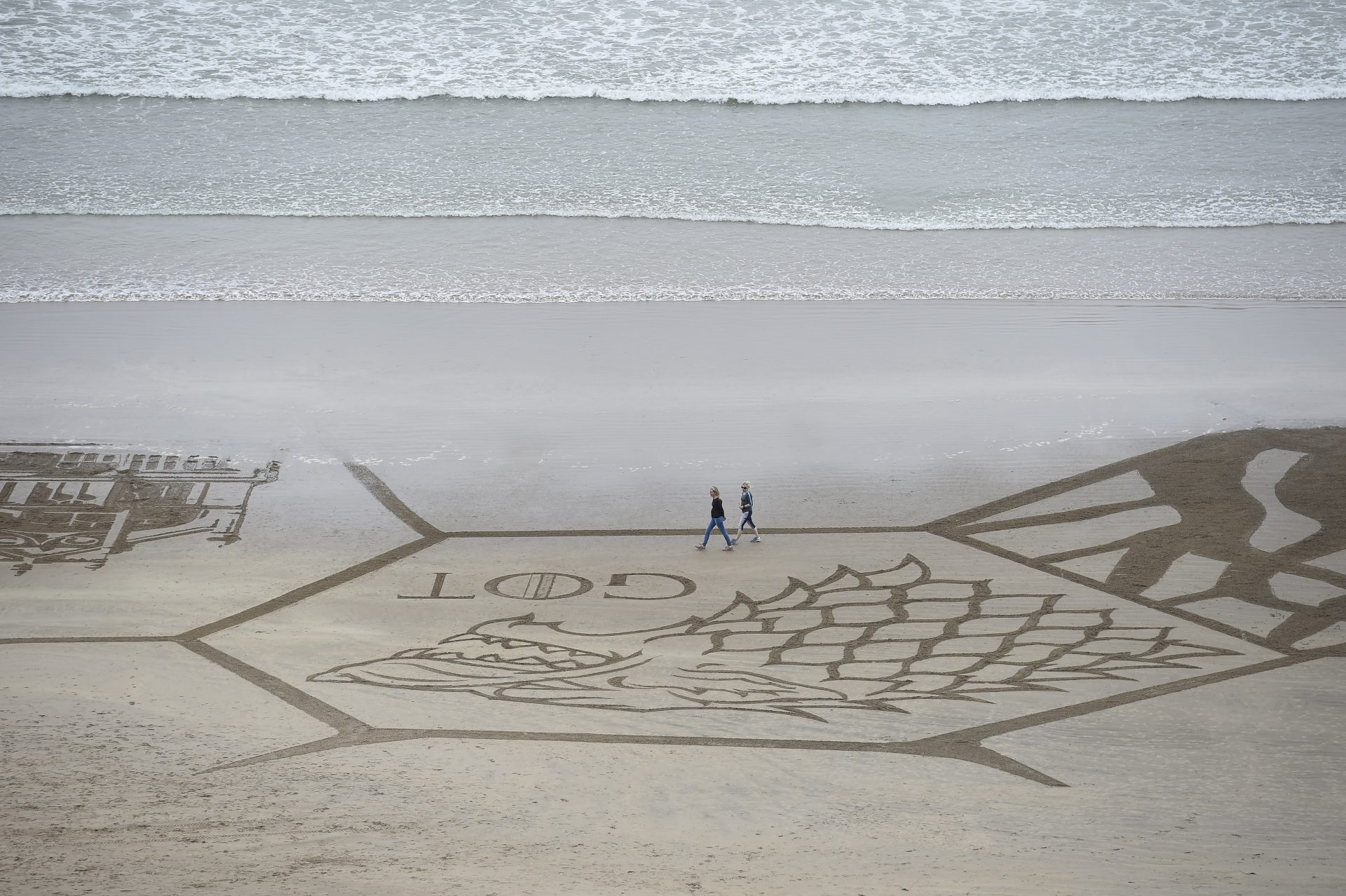 Tourism Ireland has collaborated with top sand artists to create five stunning images on Downhill Strand to celebrate The 148th Open coming to Northern Ireland. With all eyes on The Open, this is a fantastic opportunity for Tourism Ireland to showcase a variety of world-class attractions, inviting visitors to discover why now for Northern Ireland.

From 14 – 21 July 2019, The Open makes a historic return to Northern Ireland. First held on the lush green links of Royal Portrush on 4-6 July 1951, golf’s original championship finally returns to Northern Ireland 68 years later, bringing the world’s greatest players together to compete for the Claret Jug. Famed as one of the most difficult links tests in the world, the course will provide a stern test of golf skill with a stunning natural backdrop.

On 3 July 2019, Tourism Ireland collaborated with leading sand artists, Sand in your Eye, to depict some of Northern Ireland’s most treasured attractions and figures in Northern Ireland.

Titanic Belfast and Guildhall in Derry-Londonderry represent Northern Ireland’s striking landmarks and unique history. Located on the far left, the inclusion of Titanic Belfast – Winner of the World’s Leading Visitor Attraction (World Travel Awards 2016) – tells the story of RMS Titanic, from her conception in Belfast in the early 1900s to her famous maiden voyage and tragic end.

The illustration of Guildhall in Derry-Londonderry pays tribute to one of the best-preserved walled cities in Europe, now over 400 years old. Housed within its walls, the spectacular Guildhall is one of The Walled City of Derry’s most striking visitor sites and was used as a key backdrop in the hit TV series Derry Girls.

Home to more filming locations for the Seven Kingdoms than anywhere else in the world, Northern Ireland has truly earned its title as a Game of Thrones® Territory. The sand illustrations of the Dark Hedges and House Stark Direwolf Sigil are a nod towards the many compelling landscapes used across Northern Ireland for the award-winning TV series and invites visitors to discover the trail of scenic film locations for themselves.

In particular, The Dark Hedges remain a magnificent natural sight and have become one of the most photographed natural phenomena in Northern Ireland, representing the Kingsroad in the second series.

Julie Wakley, Tourism Ireland’s Head of Great Britain commented: “With the spotlight on Northern Ireland for The 148th Open at Royal Portrush, we were delighted to create such stunning sand art on nearby Downhill Strand. The sand art highlights some of the world-class attractions as well as beautiful scenery that make this a fantastic time to come and experience Northern Ireland for yourself.”

Join in the conversation on social media: @TheOpen ☘

For more GB information, please contact The PC Agency on tourismireland@pc.agency or 020 7768 0001.